Guitar, a plucked string instrument is said to have originated in Spain in the 16th century. Since then, the instrument has undergone modifications in its structure, and current day guitar is made of long fretted neck with 6 strings on a fingerboard. The tone is produced by the vibration of a tightened string either by strumming with a plectrum or fingers. The guitar finds a place in genres like country, blues, rock music, jazz etc.

Shivakumar has been exploring various techniques and practices concerning with Guitar education and teaching since 20 years as he has a passion for teaching. He completed his diploma in music from “London School of Music”. He has been involved with few music composer and singer to keep up his phase of learning. He has also played in many orchestras and Music Bands as Rhythm player and also as a Solo player. He has received few awards as a token of appreciation from well-known artists 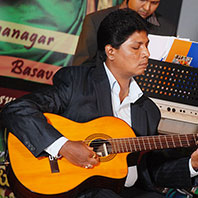