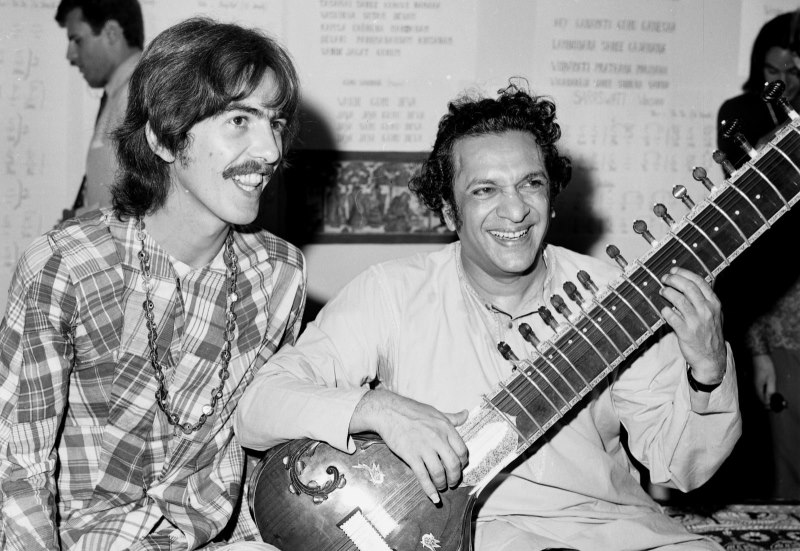 There emerged Raga rock! Raga rock is a subgenre of rock music formed when the latter was influenced by Indian classical music. The impact of Indian Classical Music became pronounced during the mid-60s.

Popular bands in the west started using quintessential Indian notes and instruments, notably the sitar and tabla. Some of the popular groups which were inspired were The Beatles, The Rolling Stones, Yardbirds, The Byrds and The Kinks.

The most significant contribution to this genre came from Ravi Shankar. His influence on The Beatles, especially on George Harrison, lead guitarist of the band, was tremendous.

The sitar maestro Ravi Shankar’s musical genius had a profound impact on the pieces created by The Beatles, especially George Harrison, in their later years. He mastered the sitar from Ravi and introduced the instrument into his composition.

Earlier, Harrison had included the sitar in the composition of the hit song ‘Norwegian Wood.’ Thanks to the song, Ravi and the sitar became a worldwide phenomenon. Other songs by The Beatles that used the sitar were ‘Love You To’ and ‘Within You and Without You.’ Several bands from the era began using the sitar, including The Rolling Stones, in their song ‘Paint it Black.’

After The Beatles broke up, Harrison continued to be inspired by Ravi. The duo organized and performed at ‘The Concert of Bangladesh.’ It was their most famous rendition together, which became a benchmark for benefit concerts.